The morning of my 25th birthday, New Year’s Day, I stood, clutching with excitement, all I had wanted for my birthday. Two pink lines on a stick.

After losing our Baba, due to a missed miscarriage, that December, I was now growing our rainbow baby! 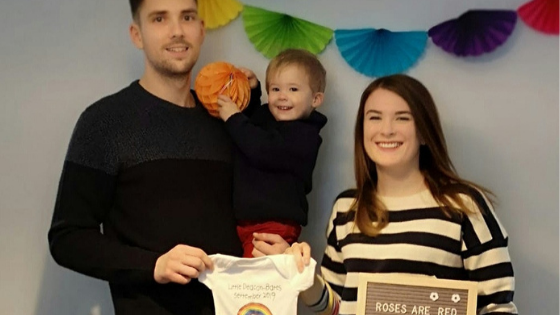 The first trimester was nerve wracking. But I had early scans confirming all was well and once past the 24 weeks mark, viability, I was feeling confident that we would be bringing home a brother for our son, Vincent.

We chose the name Roy and started doing all the things excited, expectant parents do.

I began planning a rainbow nursery and my sister had planned me a rainbow baby shower.

My favourite thing I had found for Roy was a beautifully soft mint coloured rainbow blanket. I purchased two so that one could always be with him whilst the other was in the wash. I was so excited to wrap one around our baby to help announce the arrival of our rainbow whilst keeping him cosy and snug.

What I never saw coming was that Roy would always be snuggling one of those blanket as we sent him off to his final resting place with one of those special rainbow blankets wrapped around him. Whilst that 2nd blanket would be clung onto and cried into by me.

Roy was born via emergency C-section at 28 weeks and 4 days pregnant due to fetal distress after my waters had broken 4 days prior. 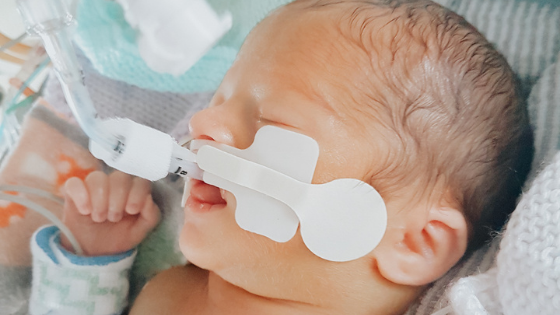 Although he was born early, my husband and I didn’t think he was going to die until the end. For the odds of a 28 weeker are so good and Roy was born at an amazing weight of 2lbs 13oz, the Drs and nurses reassured us that he would be fine.

But he died. Our rainbow baby was only with us for just shy of 5 days.

Sepsis is what took our rainbow baby from us. Roy contracted an infection that was spotted far too late and developed into sepsis that rapidly took hold of his lungs and brain.

Despite having sepsis and being heavily sedated he still showed us his character. He would cheekily open up an eye. He curled his hand around our finger. He pushed his feet against our hands as we held him through the incubator. 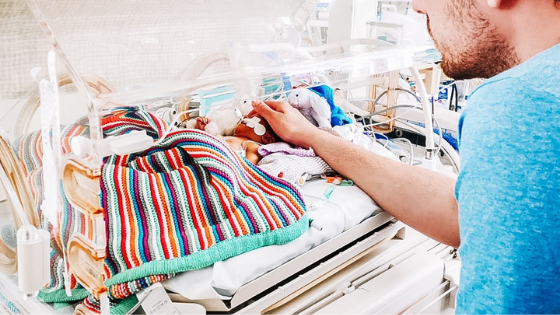 Those days in NICU watching our little baby boy fighting hard for survival felt like we were trapped in some bizarre alternative universe where time somehow slows down yet you’re still unable to comprehend what is happening in front of you. I barely slept, grabbing only short bursts of 20 minutes here and there, as I spent as much time as possible by my baby’s side or pumping milk to build him a stash of milk ready for when he could start drinking. But he never had that chance.

On his 3rd day of life his Consultant sat us down to discuss “Do Not Resuscitate” and we painfully agreed. And the next day we were faced with the difficult decision to turn off his life support. A decision that still haunts me today. For although I know there was no real choice about it, the Drs told us it would be kinder to let him die in my warm arms than slowly alone in the incubator, I will always torture myself with “what if”. 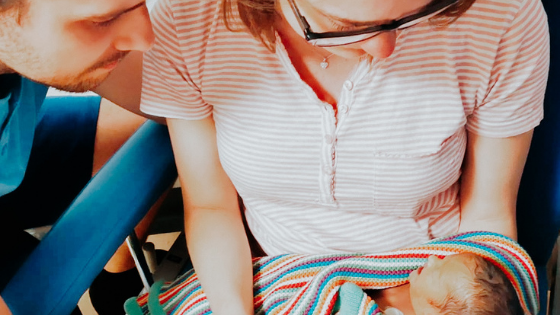 That last day of his life and those days immediately after his death were the hardest of our lives.

But Roy’s 4 days and 23 hours of life have also given us joy. He was and still is our rainbow baby. He does bring us happiness when we think about him. Sure, that joy is bittersweet as there is undeniable grief that will always go hand in hand with the joy Roy brought us. But we cherish the fond memories of that pregnancy and of his life and he is spoken about by all of us so often. Vincent frequently brings him into conversation and includes him in his play. Roy remains very much part of our family.

My pregnancy with Edmund was terrifying. At the start it looked as though I was experiencing another missed miscarriage as the viability scan showed no heartbeat and a baby measuring far too small to be correct by my dates. Yet somehow, at the next scan to double check all was lost before I opted for medical management, a heartbeat was seen and our baby had caught up to match my dates! My pregnancy was viable.

But that wasn’t the end of the worry, for I constantly had fear of delivering another premature baby despite being heavily monitored and well looked after by my consultant and midwife.

My fears looked as though they would become a reality at 23 weeks pregnant when I lost my ‘bloody show’ and my body started going into early labour. I was blue lighted, in an ambulance, to a hospital that could help with micro preemies, those born before 27 weeks gestation. 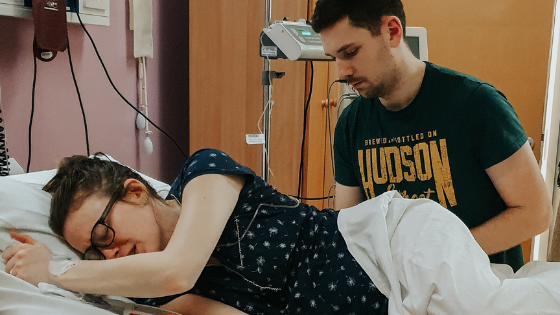 For the next week the medical team battled to keep me healthy and to help keep my baby inside for as long as was safely possible. We had many conversations with Drs about how we could deliver Edmund and how likely it was that he would die being born that early. My body was drained, I laboured on/off for a week. But that exhaustion was nothing compared to the exhaustion of my and my husband’s mental health.

Then at 24 weeks my waters broke which strangely ended all the early labour contractions and my body stayed in a strange limbo state at 3 cm dilated. The medical team decided to keep me admitted on the antenatal ward, just in case I did start labouring as premature births usually happen pretty quickly. I remained admitted to that ward for 3 weeks and due to Covid-19, my husband and son were unable to visit me.

At 27 weeks pregnant I was discharged back to my local hospital. As I lived close to my local hospital, only a 45 minutes drive, it was agreed I could remain at home but with hospital visits twice a week for checkups and that I should go in if anything felt remotely concerning. 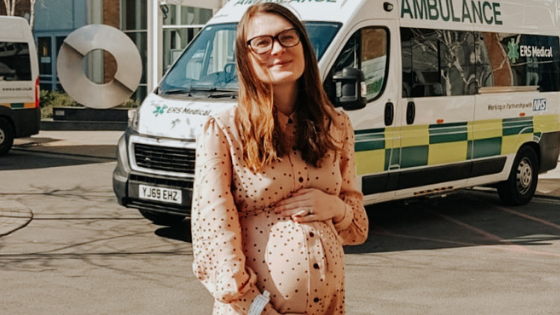 And at 27+6, my pregnancy did feel concerning. I noticed that I had not felt my baby move for quite a few hours and I was starting to get some irregular tightening. My husband encouraged me to load up my hospital bags and drive myself to get checked out at maternity triage. Due to Covid, he was unable to come with me so he remained at home with our son.

On the drive there I realised I was actually in labour. At the roundabout before the hospital my contractions were coming every 3 minutes, I remember distinctly watching my car’s clock with panic at how frequent they were becoming. Thankfully I was able to park right outside the maternity unit but I wasn’t able to carry my labour bags as I was barely able to carry myself through the contractions by this point.

Upon arrival the midwife ushered me into a small assessment room and hooked me up to a monitor. Within 10 minutes she confirmed I was labouring and she needed a Dr to assess my baby as things were not looking good.

Edmund was born via emergency C-section whilst I was under general anaesthetic bang on 28 weeks weighing the same as Roy, 2lbs 23oz.

His entrance into the world was very rough for him. He had meconium in his waters and required resuscitation and adrenaline to restart his heart. 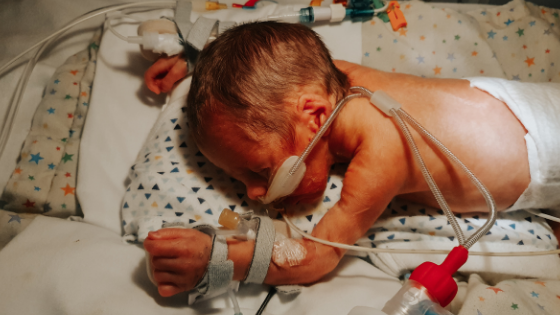 When seeing him for the first time, almost half a day after his birth, we were warned that he really was on death’s door. Edmund looked nothing like Roy but as we looked at him through the incubator it was as though we had been transported back in time. 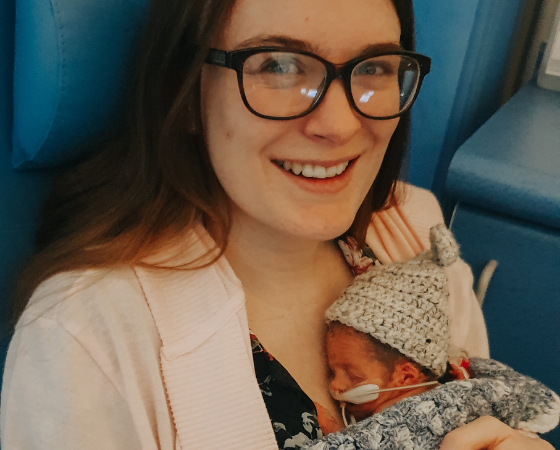 Going through NICU is like riding a terrifying rollercoaster, as anyone who has had a NICU journey will tell you, and not being able to support each other in person was so difficult. Especially when the Drs told us Edmund was battling a both fungal and bacterial infections. Roy did having just one infection yet here Edmund was with two and the Drs told us the fungal one was something they hadn’t seen before. My husband and I cried to each other over the phone; this time, instead of thinking our baby would survive his NICU journey, we spent those first few weeks thinking we were waiting for him to die.

I took an incredible amount of photos and videos, kept a detailed diary, sung songs and shared stories to Edmund. I collected everything of his I could. I tried to imprint every moment of his life into my mind. I was trying to make the most of my little Eddie whilst he was still here for I have so many regrets with what I never got to share with Roy.

But, thankfully, to our amazement Edmund started going from strength to strength. All his tests came back clear. His scans looked good. At 2 weeks old he came off all breathing support and went on to have “full feeds” of breast milk. Everything looked so positive! 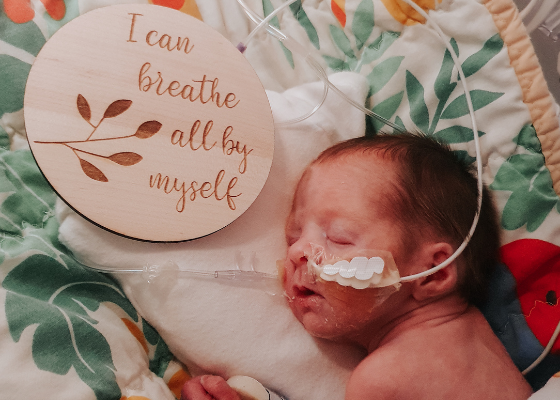 But then came the reflux and the inability to gain weight followed by having to go back onto breathing support and his diagnosis of Chronic Lung Disease.

Although they were setbacks, we were just so relieved they were all treatable and that Edmund was still thriving and looking to be on the home-straight!

When he moved out of NICU (Neonatal Intensive Care Unit) and into SCBU (Special Care Baby Unit), we finally allowed ourselves to start preparing our family home for Edmund coming home. We allowed Vincent, who was nearly 3, to prepare to have big brother duties. He was beyond excited. Vincent loved watching Edmund over video calls and kept asking when he could finally come home for a cuddle.

Watching that first brotherly cuddle, with Vincent beaming with pride and Edmund so content, on our family sofa was beautiful. 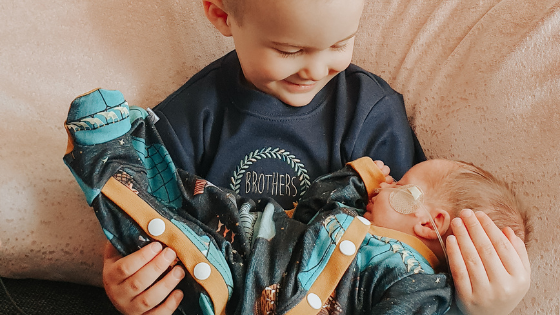 Our family is so full of love and joy at having Edmund home. Roy is still very much missed though. We hold love for all our boys and include Roy in our family always. 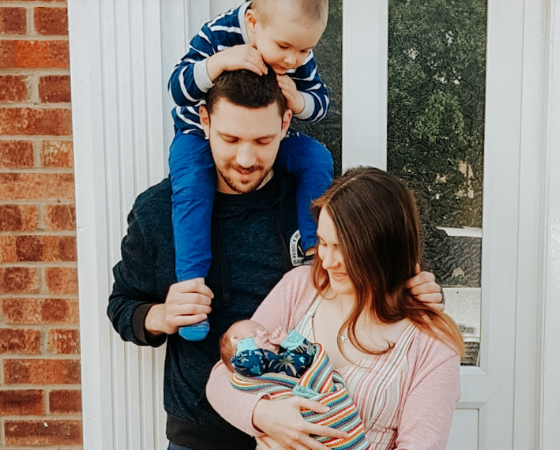 Oh and that second rainbow blanket of Roy’s, that is now used to keep his little brother snug.